At PartnerShip, we’ve pretty much seen it all. Our freight specialists have helped shippers transport everything from specialty candy to baseball jerseys, DJ equipment to used tractor engines. Every once in a while, we have the opportunity to work on a load that is unlike anything we’ve shipped before. September brought us something extra special – a section of steel thought to be one of the few remaining pieces left of the World Trade Center. 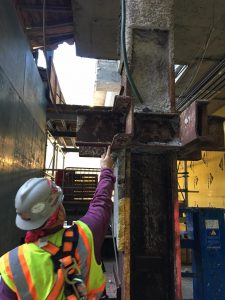 The steel beam belongs to the remarkable group of men behind American Freedom Distillery in St Petersburg, FL. They are a veteran Special Operations Unit and were the first force to engage in Afghanistan during the aftermath of 9/11. The beam was gifted to the team and they thought it best not to be held in a private collection, but rather displayed for the benefit of the public as the nation continues to heal. The steel piece is being utilized in a brand new memorial titled “Rise St Pete” honoring those affected by the events of 9/11. Located in the Warehouse Arts District near the planned American Freedom Distillery location, the groundbreaking ceremony took place this past weekend, keeping a special connection to Veterans Day. The monument will spotlight the steel beam as its main point of focus. It will also feature an interactive fountain and copper recovered during the recent Statue of Liberty renovation. 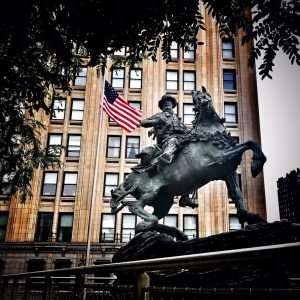 The retired Green Berets have set up shop in St. Pete, which serves as a close-knit hub for many of the military community including retired vets and their families. After years spent serving together in the military, they’ve settled down with families and are tackling civilian life. However, they often talked about a lingering need – a common goal or objective that would keep them united even after their time in the military. That dream was prompted during a group trip to Yosemite where they visited a small craft brewery. While there, the men fell hard for the science, art, and discipline of creating small-batch craft spirits. The life-long friends had found a way to stay connected through a shared purpose, a method to ease into life as civilians, and a push to live the American dream that they had so vigilantly defended.

After several years learning techniques from experts in whiskey hot spots such as Kentucky, Tennessee, Ireland, and Scotland, American Freedom Distillery has mastered their signature spirit – Horse Soldier Wheated Bourbon Whiskey. The liquor is named after the elite group of horseback-mounted special ops teams leading the charge in Northern Afghanistan after the 9/11 tragedy. The bottle label features an image of the America’s Response Monument, a memorial dedicated to the Special Forces heroes, and a special run of the whiskey will feature bottles formed in molds made of steel salvaged from the Twin Towers. The distillery and adjoining restaurant, America Neat Grill and Whiskey House, is anticipated to open early in the new year.

At PartnerShip, we are dedicated to moving each and every shipment safely and securely. But, sometimes there are very special cases that really stand out above the rest. It’s not every day that you ship a piece of history. Want to stay connected so you can keep on top of what we are working on at PartnerShip? Follow us on Facebook!